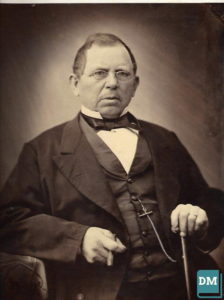 Above from left to right: Auguste, Franz, Ernst, Marie Anna

Provided by a descendant of the Müller family.

National and Holiday Pass of the Territorial Army Infantryman Müller to Demmin, 29 September 1831

Extract from the Demminer Tageblatt of 22 December 1881

Copy of the patent for appointment as Commissionsrat, 14. December 1883

Transcript of the correspondence to the 60th anniversary of the citizen, 20. December 1891

Extract from the Demminer Tageblatt of 22 December 1891

Music program of the 2nd Pomeranian Ulanen Regiment No. 9 on the occasion of the 90th birthday, 1895

Report on the celebration of the 90th birthday of Johann Christian Friedrich Müller, 23 March 1895

We will learn the following details about the celebration of the ninetieth birthday of our esteemed fellow citizen, the Royal Commission Councillor Chr. Müller, which will certainly be of interest to the readers of this paper, since the young old man, who still enjoys a rare freshness of body and mind, is one of the best-known and generally respected personalities not only of the city, but also of the district.

At 7 a.m. the trumpeters of the local Ulanen regiment serenaded a serenade that began with the chrola “Lobe den Herrn” and among others performed the wonderful composition “Salve Caesar Germanorum” by Linnarz (after a poem by a family member). After the serenade, all the children and children’s children, 33 in all, gathered and offered their congratulations and gifts. Gradually, deputations from the town appeared, first the workers from the Müller’schen machine factory, 8 of whom had been working for years under the direction of the jubilarian. They dedicated to the former boss and founder of the factory an artistically printed address with a festive poem honouring both the celebrated and the donors. Afterwards the marksmen guild had their letters published in parade uniforms to show their honorary member and longtime comrades a stately bronze bust of Sr. Majesty of Emperor Wilhelm II and an extremely skilfully and sensibly executed pen drawing address offered by Max Bormann. Then the old people of the guild appeared and personally conveyed the wishes of the guild.

We would also like to mention a deputation of the City Assembly of Representatives, whose active member the Jubilar has been for many years, under the leadership of its head, attorney Müller.

The magistrate was represented by the mayor Knitter, the syndic Hirsch and three city councillors. The Vogelschützengesellschaft offered their congratulations to their honorary member through the board members. The end of the deputations was marked by the representatives of the Order of Knights of Malta, who presented their highly esteemed Grand Grand Master of the Order with a powerful figure of a Urgerman in bearskin with a drinking horn in his hand. The leader of the deputation, Justice Councillor Dr. Tzschirner, recited a festive poem written by himself, celebrating the primordial power and primordial German cosiness of its honorary member, based on the old German legend with delicious humour.

Among the other numerous congratulators we mention the superintendent Thym and Archidiakons Schwing, the councillors of the district court Rhade and Görcke and the secondary school director Schneider. Numerous telegrams and letters of congratulations, most of them in poetic form, were delivered by local postal workers and the voluntary Turner fire brigade.

No less numerous were the wonderful flower donations and meaningful gifts. As we learned, the birthday child happily survived all the efforts of the festive day in full vigour and participated in the closer family celebration until late into the night.

copy of the plaque

For the 90th birthday

the bust of Sr. Majesty the Emperor.

On the left side of the diploma are 2 hand painted allegorical female figures with the inscription 1805/1895.

Your ticket for the: Müller, Johann Christian Friedrich, different documents, 1831-1895